This is taken from the Alliance for Natural Health newsletter: The UK government has published a consultation seeking views on a future consultation process as it continues to press ahead with plans to fluoridate UK water supplies. Added to this, plans by NHS Glasgow and Greater Clyde, in Scotland, to fluoridate  water supplies in its region have been revealed. A new study reinforces the danger of fluoride to children's health as it reveals the link between prenatal fluoride exposure and reduced intelligence in children aged between 4 and 12 years. Push back against the plans continues with the release of an updated postcard (see below) that can be sent to your MP, if you live in UK or Scotland, to protest against the plans. 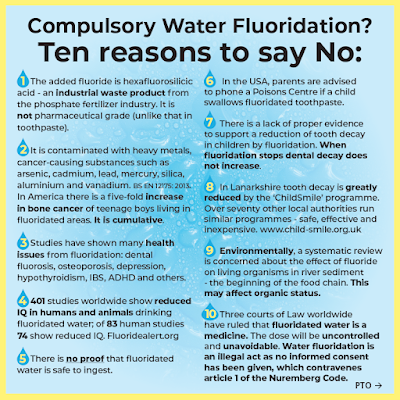 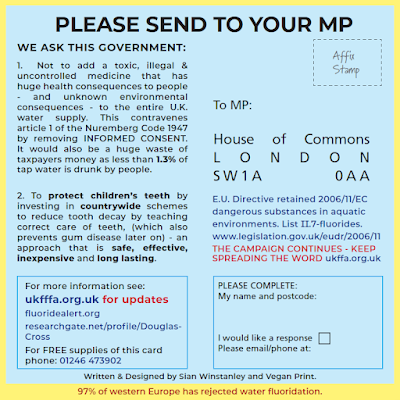 For a great update on why fluoridation is not great see: https://www.anhinternational.org/news/coming-to-a-tap-near-you/ 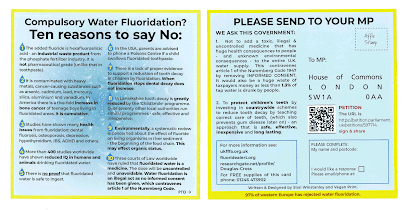 Here's the Alliance for Natural Health's article out today plus link to the petition:

"In September 2021 the UK government signalled its intent to fluoridate the entire UK water supply. The move effectively removes control for such decisions from local councils in the UK, who were always responsible prior, in favour of centralisation. Fluoridation of the water supply constitutes a widespread crude and toxic medical intervention that will affect an unsuspecting public, under the guise that it unequivocally prevents tooth decay.

"What’s more, the UK Government is highly unlikely to inform UK citizens that it will effectively be mandating what amounts to mass medication of the population based on extremely limited data; without disclosing potential harms or obtaining properly informed consent. Something of a recurring theme at the moment."

Here's a new petition to counter the plans. In the short time it has been available, the petition has already amassed over 20,000 signatures. Please click here to add your objection against the flagrant disregard of the substantial body of evidence pointing to the health harms of a one size fits all approach to medicine.

Disturbing news reported this last week - it looks like we might need to get our Safe Water group together again? Anyone up for supporting?
'The UK government is poised to take control of decisions regarding fluoridation of water away from local councils in the UK and centralise them in order to push a crude and ineffective treatment to prevent tooth decay. Following publication of a white paper earlier in the year, plans for, what in effect, will be mandatory water fluoridation in the UK have now been included as part of the Health and Care Bill. Fluoride is a known neurotoxin and has been shown to reduce levels of IQ in children. A fact that seems to have been overlooked by the authors of the Policy Paper. The Paper instead relies on reviews from countries where a large percentage of the population is exposed to fluoridated water to validate its claims. The UK government is highly unlikely to inform UK citizens that it will effectively be mandating what amounts to mass medication of the population based on extremely limited data, without disclosing potential harms or obtaining properly informed consent'.

News item from the Alliance for Natural Health: https://www.anhinternational.org/news/weekly-news-update-week-32-2021/

This blog is sleeping at the moment but couldn't not link to this post...The Lancet, has officially classified fluoride as a neurotoxin, in the same category as arsenic, lead and mercury. Surely this is one more nail in the idea that we can continue adding it to water supplies....

While our group members are continuing to monitor the situation we have not been meeting as a group regularly. We are delighted that the immediate threat of water fluoridation appears to have disappeared for the time being. Do get in touch if you have any thoughts or ideas.

Adding fluoride to water supply may have no benefit, say experts

Sent by a supporter: Please add this to our blog: Sun on Sunday, Dec 14th. On page 2 there was a short article entitled "Fluoride promise".  It read:  'Labour will make adding fluoride to tap water a priority if it wins power, Andy Burnham has vowed. The shadow health secretary said "We need to be bolder on health and to my mind that includes water fluoridation.  It is a simple way to improve health of children. There is no evidence it damages health."

We've just heard!!!! Fantastic news - congrats to all who have campaigned on this issue. The evidence just does not stack up - fluoridation is not the way to deal with tooth decay. This win means that any plans to fluoridate our water can and will be stopped.

Public Health England (PHE) will take no further action to implement a proposed water fluoridation scheme that would have served around 160,000 Southampton residents and a further 35,000 people in neighbouring parts of south west Hampshire.

PHE chief executive Duncan Selbie explained: “Water fluoridation would make a big difference to the dental health of Southampton children, particularly those in the most socially deprived areas.  We regret having to drop the scheme, but we believe it is the right decision in the circumstances.”

“We want to work with Southampton City Council to tackle Southampton’s high rates of tooth decay. We have offered support to the Council in coming up with plans to reduce tooth decay among local children.”

Just occasionally during the long sordid history of fluoridation an individual stands up against the bullying tactics of the arrogant promoters of fluoridation. This has just happened in Israel where the Minister of Health Yael German has ended fluoridation in Israel despite the vocal and vociferous attacks of fluoridation promoters which have been gleefully - and one-sidedly - reported in The Jerusalem Post. Doubtless these ill-informed critics will continue their bullying tactics and do everything they can to encourage dentists and doctors outside Israel to join their ignorant outcry. However, before the latter do so they should read carefully the letter below written to the Health Minister by Dr. Hardy Limeback, one of Canada's leading dental researchers and former head of Preventive Dentistry at the University of Toronto.  You can also see FAN’s open letter to Minister German sent on June 25, supporting her opposition to fluoridation and signed by many professionals from around the world.  We congratulate the Israeli Minister of Health, Yael German, for performing her job with integrity while under great pressure. She has offered the international public health community the model to follow on the fluoridation issue.

Please consider voting no in the Guardian poll (in right hand column): http://www.theguardian.com/uk/commentisfree

Update 29th March: The Guardian  poll is now closed – although you can still comment.

The final vote was 63% No, 37 yes – a big  shift from  53/47 on Wednesday night.
http://www.theguardian.com/commentisfree/poll/2014/mar/26/fluoride-drinking-water-public-health?commentpage=2
There were 423 comments

The Mail-online is also now closed  for comment – there were 197 comments;
http://www.dailymail.co.uk/health/article-2589561/Smile-Fluoride-tap-water-IS-safe-afterall-claim-scientists-IMPROVE-dental-health.html

Around 80% of the comments were anti-fluoridation and there were  a number of very thoughtful  and detailed cases, particularly on the Guardian site.

ABOUT US AND OUR AIMS

The Safe Water Campaign for Gloucestershire say NO to water fluoridation. We need your support to ensure that the Water Companies and the Strategic Health Authority don't fluoridate.
The aim of the group is to campaign for safe drinking water, in particular to campaign against the fluoridation of our public water supplies. Dr Peter Mansfield, a physician and an advisory board member of the recent government review of fluoridation has said: "No physician in his right senses would prescribe for a person he has never met, whose medical history he does not know, a substance which is intended to create bodily change, with the advice: 'Take as much as you like to, but you will take it for the rest of your life because some children suffer from tooth decay. ' It is a preposterous notion." We at the Safe Water Campaign agree. 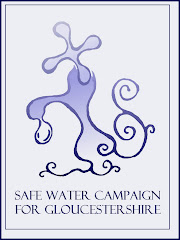 The chemical in question...

Hexafluorosilicic Acid is a registered Class 2 Poison under the Poisons Act 1972. It is comparable to the deadly weed killer Paraquat which has no known antidote and has now been banned from sale to gardeners. It is not certificated as a medicine. How could it be? The current level of one mg per litre of fresh water is around ten times the concentration of natural and harmless Calcium fluoride, often found in natural water sources.

How you can help